Author Ed Ochs announces the publication of Rock Around The Sun: The Further Musical Adventures of Rock Detective Basil Ghoston. The paperback is now available on Amazon.com and is also accessible on Kindle. 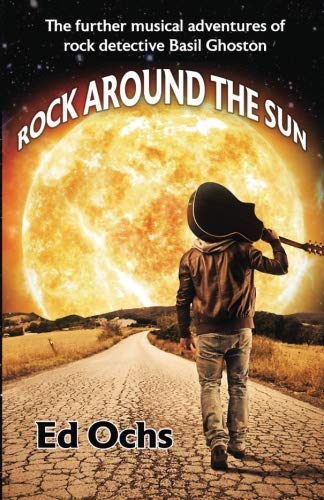 Rock Around The Sun is the sequel to Ochs’ critically acclaimed fiction debut, This Rock Can Talk. He also authored the nonfiction memoir Freedom Spy: David Jove and The Meaning of Existence.

While This Rock Can Talk explored Basil Ghoston’s precarious perch in the music business as a magazine columnist searching for “the best new music in the world,” Rock Around The Sun finds Basil launching his new career as a “private ear” by discovering an unknown heir to the The Beatles musical legacy.

“It’s tough to boil down what Rock Around The Sun is all about to a single soundbite. There’s so much going on all the time,” Ochs says. “Basil runs a gauntlet from beginning to end, dealing with a variety of unusual musical characters and hangers-on along the way. Rock Around The Sun is equally adventure and misadventure, musical safari and spiritual journey, comedy and drama.”

Ochs adopts the mystery/detective genre to experience the call of rock music and the music business and those who live in it, gleaned from his years as an editor at Billboard magazine. He captures the essence and power in rock music and the soul of uniquely talented artists who create the music that drives Basil’s quest.

“There’s more writing in this book than This Rock Can Talk and more back story,” Ochs says. “Basil struggles to live with losing his job and faith in his future, yet he musters the courage to strike out on his own. He finds refuge in a deeper, more personal music that partly explains his relentless search for a style of music – magical music – more expressive than any contemporary music he’s heard before.”

Ed Ochs is a multifaceted writer, editor, journalist, columnist, author and musician. With over four decades of experience in the music industry, publishing and news business, Ochs continues his memorable journey on California’s Central Coast.

Listen to the Jukebox

CHECK OUT MY BOOKS

This Rock Can Talk

David Jove and the Meaning of Existence

Rock Around The Sun